Supporters of former Brazilian president Jair Bolsanaro recently stormed the National Congress of Brazil and the Três Poderes Plaza (Three Powers Plaza) in Brasilia, the nation’s capital. Protestors attacked and successfully entered the National Congress, Supreme Court, and Presidential Palace after overwhelming security forces who were sent to protect the Three Powers Plaza. However, at the time of the protest, none of the mentioned locations/arms of the Brazilian government were in session, specifically, the National Congress was not in session, minimizing the damage of the attack to damage on the structures which the branches of the Brazilian government are housed in. Brasilia is a newly constructed capital for the country of Brazil, which was established and constructed to hold the seat of power for the Brazilian government, replacing the former capital of Rio De Janerio in 1960. Since then, the Brazilian government has been racked with corruption scandals and a surge in extremist political parties, with the most recent election showing this new divide. Today, incumbent Brazilian president Jair Bolsanaro faced off in the election against Luiz “Lula” da Silva, who served as Brazilian president from 2003-2011. Bolsanaro’s party, Partido Liberal (PL), which is a conservative-liberal platform, ran against da Silva’s party, Federação Brasil da Esperança (FE Brasil), considered a Center/Far Left organization. 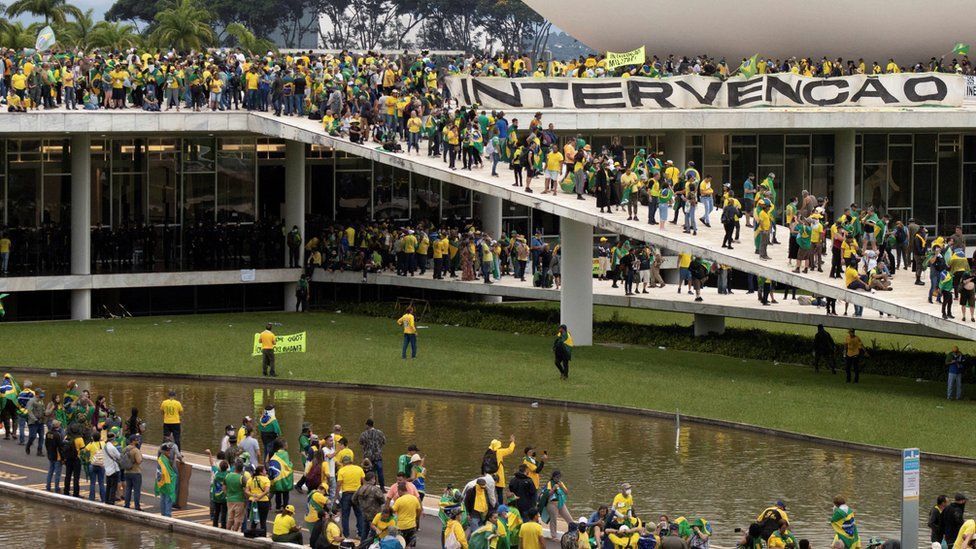 Rioters storm the ramp to the National Congress of Brazil building in Brasilia. The banner to the top right reads “INTERVENTION” in English. (Taken from BBC News)

During the 2022 General Election, Bolsanaro was defeated by Lula in the election with a 1% margin of the vote, and a 79% voter turnout. Da Silva won about 2 million votes over Bolsanaro’s 58 Million votes. After the election, Bolsanaro claimed that there was widespread election fraud, specifically citing fraud and software bugs with Brazil’s electronic voting machines, which were widely used during the election to count votes. For example, Bolsanaro created a military commission to investigate the aforementioned electronic bug but also attempted to claim that there was voter fraud outside of the electronic voting machines. However, the Military Commission found that there was no widespread/substantial evidence of voter fraud during the election. After the results of the investigation were made public, supporters of Bolsanaro continued to claim that there was widespread election fraud, with some news organizations drawing parallels to former president Donald Trump’s supporters during the 2020 US Presidential election. After a few months of denial, Bolsanaro eventually conceded his position to Da Silva and left Brazil for Tampa, Florida. Da Silva took power, but only a few weeks after taking his office, protesters arrived in the capital city in buses and began setting up camps outside of major military bases and the Three Powers Plaza, resulting in the storming of the plaza on January 8th. Multiple high-ranking officials of the Brazilian government and Brasilia’s security commission were fired, including the former head of Brazil’s Federal Police, Anderson Torres. Torres was also ordered to be arrested by Brazil’s Supreme Federal Court, among other officials. A Federal State of Emergency was also ordered in Brasilia by Da Silva, which remains in effect.

Sources for this article