Amidst the deteriorating relationship between Washington and Beijing, on November 15th, President Joe Biden and President Xi Jinping had a virtual summit to discuss critical topics. The meeting was held virtually, with Biden joining from the White House’s Roosevelt room and Xi being in the Great Hall of the People in Beijing. The meeting not only included the two leaders but also members of Biden’s cabinet and Xi’s closest government advisors.

The summit started with the two leaders reminiscing about their time together during the Obama administration, with Xi even referring to Biden as his “old friend,” according to White House officials. “It’s the first time for us to meet virtually. Although it’s not as good as a face-to-face meeting, I’m very happy to see my old friend,” said Xi through his translator. However, Biden doesn’t reciprocate the same feelings, despite claiming multiple times to have “traveled 17,000 miles” and to have spent more time with Xi than any other world leader during the time they were their countries’ vice presidents. “Let’s get something straight: we know each other well, we’re not old friends,” said Biden, “It’s just pure business.” 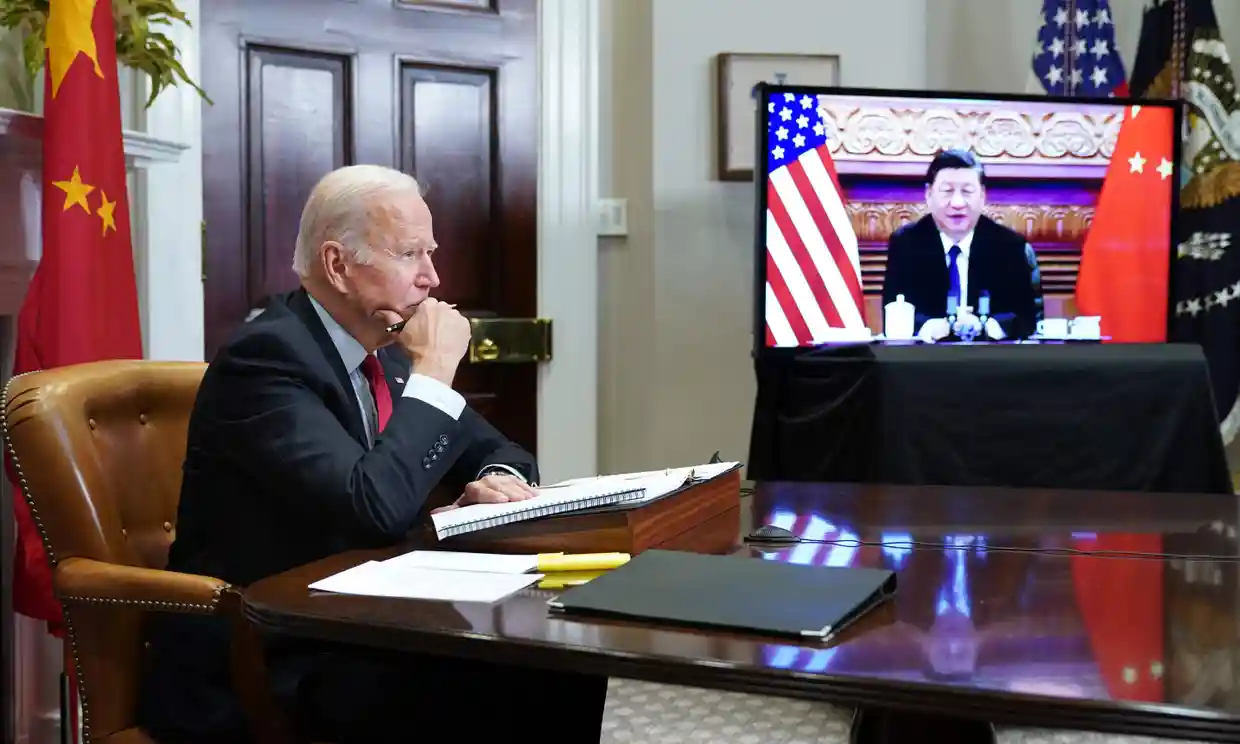 Before the main conversation could get underway, Biden, who initiated the meeting, said he wanted to establish some “common sense guardrails” so that they could understand each other clearly, and no man would be left wondering what the other is thinking. “As I’ve said before, it seems to me our responsibility as leaders of China and the United States is to ensure the competition between our two countries does not veer into conflict, either intended or unintended. Just simply straightforward competition,” said Biden to Xi through a translator.

Although the meeting was highly anticipated by many, no critical breakthroughs were made. For example, Taiwan was a hot topic at the summit as Biden expressed his concerns about China’s recent aggressive behavior in the Taiwan strait, but no developments were made. It was also expected that Xi might have used the opportunity to invite Biden to the upcoming Beijing Winter Olympics, but the topic didn’t arise.

Just a few hours before the summit, a massive public signing of a new public works package was held with the help of some Republicans. This helped fulfill Biden’s promise of working along party lines and White House officials hoped this would support the fact that democracies can work as Biden was planning on talking about the package. However, the Democratic Party is at a weakened moment as they had done poorly in Virginia’s off-year elections and polls continue to show a trend of declining approval ratings, so Biden didn’t get the chance. On the other hand, Xi just cemented his power in China as the Chinese Communist Party (CCP) adopted a landmark resolution that elevated Xi’s status.

The topics of trade, as well as climate change, came up as the two countries had recently announced a joint pledge to cut emissions at the COP26 talks in Scotland. However, many Republicans criticized the Biden Administration for failing to hold Beijing accountable on the case of human rights so they could focus on their climate agenda. “As he turns a blind eye to human rights atrocities to pursue his political agenda, Biden has allowed China to threaten American security and our allies’ sovereignty while undermining the advancement of freedom across the globe,” said the Republican National Committee shortly before the meeting.