Last Friday, President Joe Biden held a meeting with the three other leaders of a group known as “The Quad.” The bunch consisted of “leading democracies in the Indo Pacific:” the US, Japan, India, and Australia.

U.S officials say that the meeting was an informal gathering, but China has condemned the Quad several times over the past months criticizing how they’re like a “Cold War-styled” alliance, focused on limiting their rise as the dominant power in Asia. While this was never publicly confirmed by the Quad themselves, it’s obvious from the way they’ve been acting that that’s the case. For instance, an extensive military exercise was performed last month by four different navies in the Philippine Sea east of China. Moreover, who were those four navies that did the exercise? The Quad. All four of them are democracies, and suspicion leads to the theory that they are alarmed at China’s recent exert of both economic and military power. China’s been causing this suspicion by the threats towards Taiwan,  and their attempts to muscle the US and other countries out of Asia’s commercial markets. 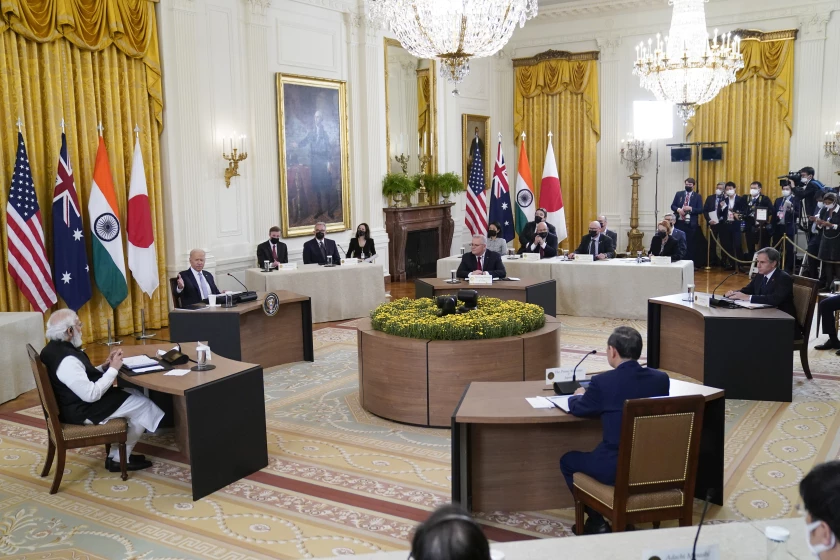 For example, last year when Australia was calling for an investigation on the origins of covid, Beijing responded by cutting off imports of beef from Australia and told the Canberra government to repress any anti-China statements from the media and Parliament. This backfired on them, however, and the result was Aukus, a new military partnership of the US, Australia, and Britain. One of the partnership’s first big projects is focusing on building nuclear-powered submarines for the Australian navy. These new submarines will help Australia prevent any seaborne invasions on Taiwan (Australia and Taiwan have a mutual trade relationship), but they won’t be able to be used yet for at least another decade. On the other hand, announcing the construction of these new submarines could also pressure China’s leader into viewing the next few years as the last chance of reclaiming Taiwan by force. “We should be worried, ” said former Pentagon official Elbridge Colby.

Many people are starting to compare the recent trade war between China and the U.S to that of the Cold War. Back then, the U.S and its allies were engrossed over the idea of a Soviet invasion of Europe, and it’s sort of similar to how they’re now doing the same for the situation with China. Other similarities include how it’s two nuclear superpowers with different ideologies fighting over control.

“We are not seeking a new Cold War,” said Biden. Putting all of the trade war stuff aside, the U.S still wants to push for its companies to be able to trade with China. “As the president has said, we have no interest in a cold war with China. It’s too big of an economy — we want access to their economy, they want access to our economy,” said US commerce secretary Gina Raimondo. The Biden administration is also currently reviewing US trade policy towards China, however, the country is still on the entity list (a list where US companies have to have licenses in order to sell sensitive technologies to other countries on the list) and the tariffs that former president Trump placed on Chinese imports is also still intact.