131 people (or more) were recently killed during an association football match at the Kanjuruhan Stadium in the Malang Regency, Indonesia. The crush reportedly started during a riot by 3,000 fans of the home team at that game, Arema Football Club (FC). Arema FC had lost the match to the opposing side Persebaya Surabaya FC, which reportedly caused 4 fans of Arema FC to invade the pitch and take pictures with their FC members. Indonesian police chased the 4 fans and reportedly beat them, causing other Arema FC fans to invade the pitch in support of the fans. However, the purpose of the pitch invasion quickly changed to asking the referees of the match how they had lost, and it quickly escalated to the now 3,000 fans assaulting the referees and Persebaya Surabaya FC’s players. This forced the opposing FC to retreat from the pitch and into the locker rooms before they were rushed to a group of police armored personnel carriers (APC)’s and evacuated from the stadium an hour later. However, during the retreat of the opposing FC’s players, Indonesian security forces were attacked by the crowd, which resulted in them deploying large amounts of CS/Tear gas at multiple stands where Arema FC’s fans were coming onto the pitch from. The fans attempted to flee from the CS gas, however, there was only one entry/exit point in their stands section, and only one of the gates at the exit points was open. As a result, when the crowd reached the exit gates, a massive human crush started from fans attempting to escape the CS gas, with an estimated 131 people being trampled to death in the Human Crush. 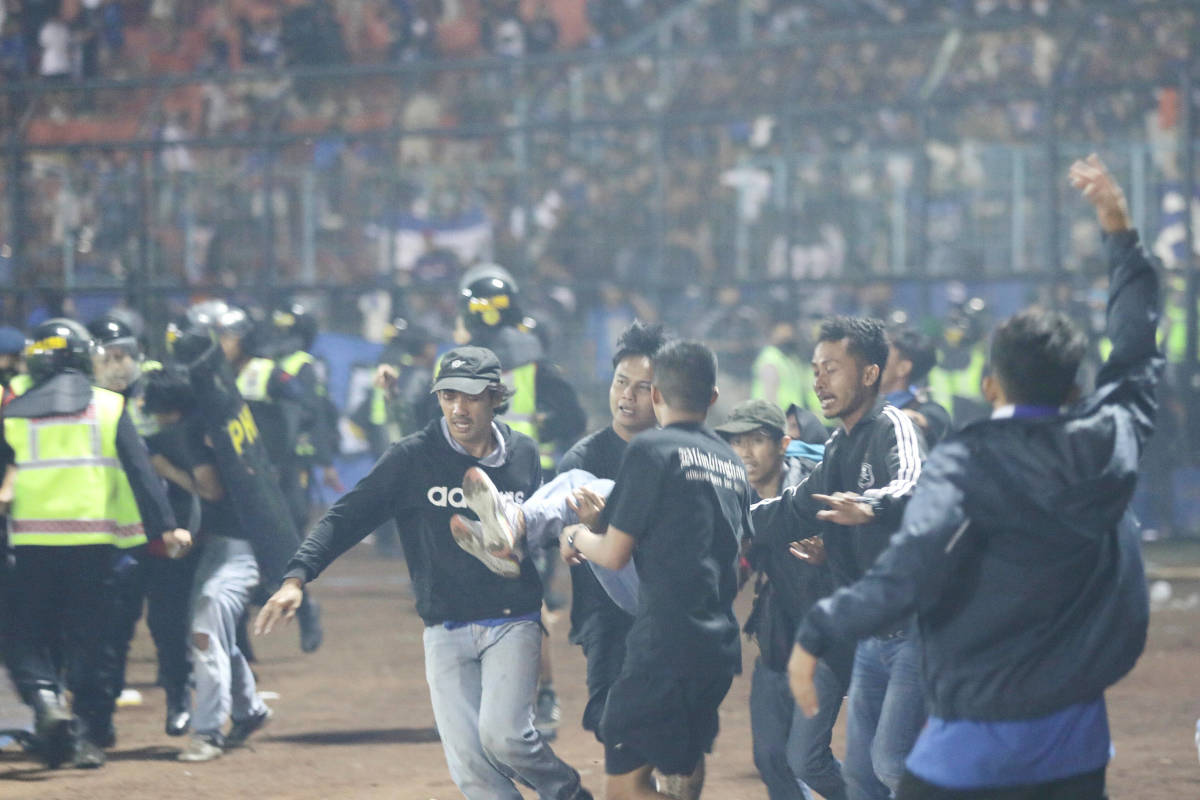 A group of men attempting to carry an injured person from the Stadium during the Human Crush, with Indonesian Riot Police/Security Forces in the background. (IMAGO/Xinhua/Bram Yudha)

Chief of Indonesian National Police Listyo Sigit Prabowo stated in a press conference that there are 6 suspects the Indonesian Police are investigating for the tragedy at the stadium. This list includes the head of PT Liga Indonesia Baru, which manages the nations head professional level soccer divisions, and is also responsible for managing the nation’s Stadiums and their safety equipment. The current head of PT Liga is Akhmad Hadian. The stadium in which the Arema disaster took place was supposedly not up to safety standards, and that a safety certificate all Indonesian stadiums require had not been acquired by the stadium’s operators, leaving the complex uncertified for public safety. Chief Prabowo also stated that 5 other individuals would be receiving charges-including the Chief Executive of the match, Chief of Stadium security, and three individual Indonesian police officers. More will be added to this story as legal information is publicly available.