Probably one of the most prominent consequences of global warming is extreme heat, which affects everybody everywhere. Extreme heat warms up an environment as well as all of the organisms that live in it. If your body develops too much heat inside of it, you could experience heat cramps, heat exhaustion, and even heat strokes, which in a worst-case scenario could kill you. Because of this, making sure to protect people who work at places where they could get exposed to excessive heat is extremely important. Especially important since this year’s summer in the continental U.S was 2.6 degrees Fahrenheit above the historical average, the warmest summer on record.

As a result of this, President Joe Biden just recently announced a new plan to help combat frequent waves of extreme heat. “As with other weather events, extreme heat is gaining in frequency and ferocity due to climate change, threatening communities across the country. … My Administration will not leave Americans to face this threat alone,” said Biden. A fact sheet distributed by the White House covered all the details, and the plan has many segments on how exactly they’re going to do this. Some examples include:

The Department of Health and Human Services has permitted U.S states and territories to use their funds normally for helping low-income households with heating bills to instead be used for air conditioning. The Environmental Protection Agency (EPA) will also use some money from the American Rescue Plan to develop cooling centers in public schools.

Many people who work in industries such as agriculture, construction, and delivery are constantly exposed to heat every day, so the Department of Labor plans to enforce regulations and procedures to limit excessive exposure. This will not only apply to outdoor workers but also indoor workers such as people who work in kitchens, warehouses, etc.

The “Urban Heat Island Effect” is what happens when an urban/metropolitan area replaces natural land with densely packed cities, which only worsens the effects of extreme heat. According to an EPA report, African-American/Black individuals are 40-59% more likely to live in an area highly impacted by extreme heat than those who aren’t African-American/Black. The Biden Administration hopes to balance out this disproportionate impact by giving states and cities this data and hoping they’ll do activities such as tree planting and other natural methods to help reduce the urban heat island effect. 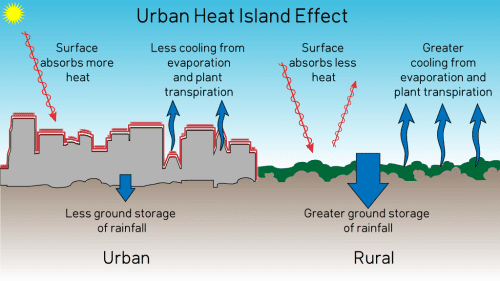 The White House also not only wants Congress to pass this plan, but the rest of the president’s domestic agenda, which will focus on further efforts to adapt to climate change as well as shifting from over-reliance on fossil fuels to clean, renewable energy. However, many Republicans don’t want these plans to pass, and some Democrats are also hesitating to agree due to the cost of these proposals.

For more information go to the official spreadsheet here, or this article explaining the symptoms and dangers of various heat-related illnesses here.